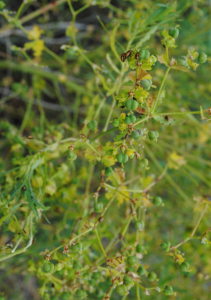 Six species of Aphthona flea beetles native to Europe and Asia have been intentionally released in the United States for biological control of leafy spurge. Aphthona nigriscutus and A. lacertosa are now the most abundant and widely distributed.  Adult flea beetles are small, measuring 3-4 mm in length, and vary in color from golden coppery brown to black. Larval beetles are 1-5 mm long, white to creamy yellow in color, with a prominent brown head capsule and very short legs. Aphthona spp. eggs are 0.7 mm long x 0.4 mm wide, light yellow soon after deposition, and darkening to a deeper yellow or light brown over the 12-19 days leading up to hatching and larval emergence.

Small and shiny Aphthona spp. are typically the most commonly encountered beetles on leafy spurge. As their name suggests, leafy spurge flea beetles respond by jumping rather than by flying when disturbed. It is nearly impossible to differentiate among the four light brown Aphthona species (A. abdominalis, A. cyparissiae, A. flava and A. nigriscutis), or between the two dark brown or black Aphthona species (A. cwalinae and A. lacertosa) in the field. All three larval stages of Aphthona spp. dwell below the soil surface, feeding on increasingly more robust spurge roots (i.e., beginning on filamentous root hairs then moving onto the primary roots) before the third (and last) larval instar transfers its feeding to target spurge root crown tissue. Actively growing spurge plants under attack by low densities of adult flea beetles have conspicuous ‘shot holes’ chewed in the leaves. At higher density adult feeding, most of the leaf tissue is stripped away, leaving stems nearly defoliated, with little more than ragged or shredded remnants of the leaves left behind.  Adult feeding can cause the leaves and tips of the stems to wilt and turn yellow or brown, but is not a significant source of spurge mortality.  Gray patches of twisted, bent over and woody looking stems are indicative of areas within stands of leafy spurge where intensive larval feeding on root and root crown tissues impeded moisture and nutrient transfer to the point that spurge plants were killed outright. 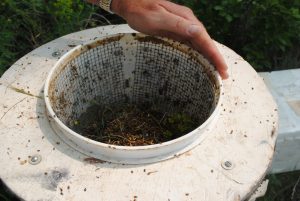 Aphthona spp. are univoltine, producing a single generation each year. Adults emerge from the soil in late spring or early summer, feed on leafy spurge foliage, and begin mating.  Females begin depositing eggs on or just below the soil, near the base of leafy spurge stems within a week of emergence.  Aphthona spp. lay 220-285 eggs over their 45-65 day adult lifespan; oviposition occurs at 2-5 day intervals, each time involving the deposition of a cluster of 3-30 eggs. Most of each female’s viable eggs are laid within the first two of the three month oviposition period. Larvae hatch from the eggs in 12-19 days, moving downward from the soil surface to immediately begin feeding on spurge roots. Larval beetles continue feeding through fall and early winter, pausing only when the soil temperature falls below 45° F.  Third instar larvae resume feeding in spring once the soil temperature reaches 45° F, then move upward, just below the soil surface and not in direct contact with the roots of their host plants, before pupating.  The lifespan of adult beetles varies according to local climate, and can be extended by cooler and moister environmental conditions. 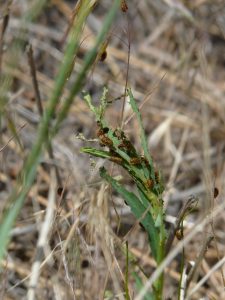 Damage is primarily caused by Aphthona larvae feeding on leafy spurge roots and root hairs. Aggregation occurs because the larvae prefer to feed on the roots of spurge plants previously or currently being attacked by other larval Aphthona; damage to host plants intensifies as larval density increases.  In addition to reducing stored energy and nutrient uptake, larval feeding may also make injured spurge more susceptible to infection by plant pathogens present in the soil.  Adult feeding on above ground stems, leaves and flowers also weaken the plants but not to the degree of larvae.

Aphthona spp. are readily available in Montana.  If you are interested in obtaining these insects view the biocontrol vendor list for options.

While leafy spurge is the primary host, the flea beetle has been reported to feed on other plant species in the Euphorbia genus, including the native Rocky Mountain spurge (E. robusta).  The two dominant species, A. nigriscitus and A. lacertosa, appear to be successful in different habitats, with A. nigriscutis preferring drier sites with lower stand densities and shorter stem heights (below 40 cm). 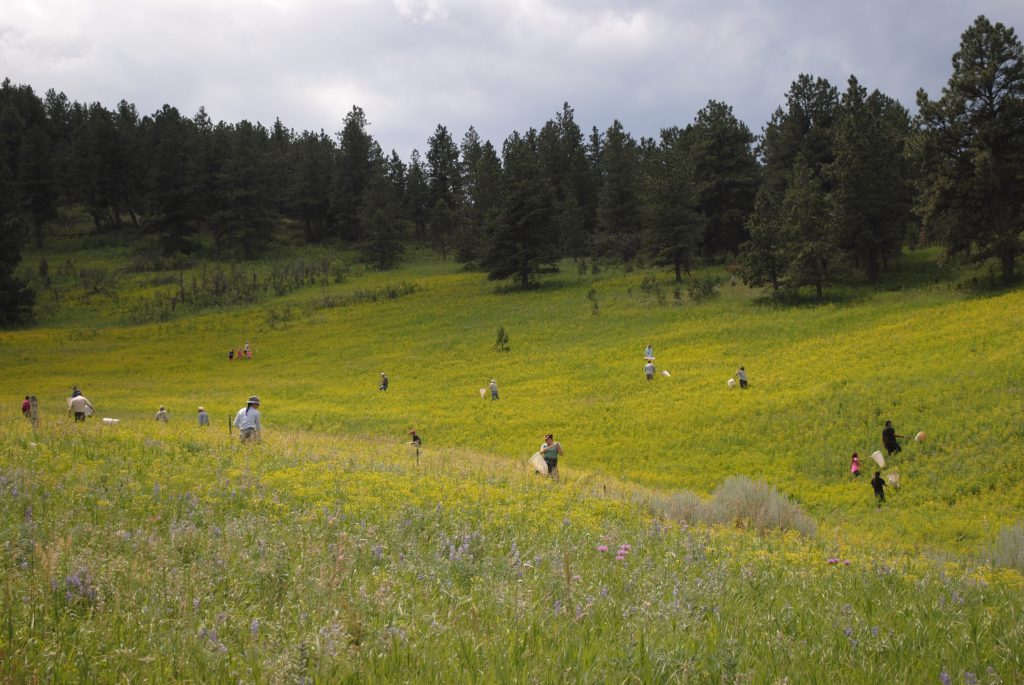 Aphthona spp. can easily be collected using a sweep net on warm sunny days, preferably when temperatures exceed 70° F and plants are dry.  Care should be taken to store collected insects in paper bags or ‘breathable’ paper or cardboard containers that will keep them dry, because they can easily drown when condensation builds up inside plastic containers.  Avoid escapees by folding over and stapling the top of paper bags, and securing caps to containers with masking tape. Collected beetles should be immediately stored at 40° F (i.e., in a cooler).  No less than 500 beetles should be released to initiate effective Aphthona biocontrol treatments.  Releasing higher densities of flea beetles will improve the success and speed of establishment.

Research from North Dakota agrees with field observations in Montana, confirming that successful establishment of this agent is highly site specific. Leafy spurge stands with thinner canopies, and areas within spurge infestations that are less densely packed with the target weed (e.g., along the edges of leafy spurge patches; on sparse live plants surrounding an Aphthona spp. release site ‘donut hole’ where spurge plant density is thinned out in response to attack by larval flea beetles) seem to be universally preferred by all Aphthona spp.  Flea beetle releases establish and persist on sites that have coarser vs. fine grained soils with an organic matter content higher than 3% (optimally 6-9.5 %), and on south, west or east facing slopes more so than on northern facing slopes. Larval survival is higher on sites with soils that are well-draining, without extended periods of flooding that can kill the larval and pupal stages. Monitoring release sites will enable you to determine if and when flea beetles become established and can be harvested and redistributed to new release sites. Beetles are easily measured by volume, with 10 ml equivalent to approximately 1,000 adult Aphthona beetles. If you are able to collect 50 or more adult Aphthona spp. after sweeping for 5 minutes the year after you make a release, you can consider initial establishment of that release successful. If you are able to collect 500-1,000 adult flea beetles in 5 minutes of sweeping at 2 or more years after initial release, then the site is ready to be harvested for redistribution.

As with other biocontrols, spurge flea beetles often achieve improved results when used in combination with compatible weed management strategies.  Herbicides labeled for use against leafy spurge are generally considered compatible with the release of Aphthona spp., although treatment applications should be staggered and not occur at the exact same time. Herbicide treatments can be effective for quickly knocking down dense stands of leafy spurge, and when applied around the perimeter of large infestations to curtail the spread of spurge into uncolonized areas.  Grazing with cattle, sheep and goats are similarly effective for improving the efficacy of this biocontrol agent by opening up dense spurge stands and reducing litter.  Precise timing of grazing on leafy spurge increases its palatability to livestock and will ensure that animals do not spread seeds to uninfested areas. Additionally, aggressive revegetation, particularly with grasses, can provide challenging competition for space, nutrient and moisture resources exploited by leafy spurge. 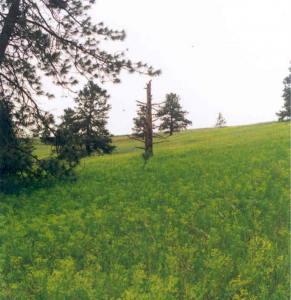 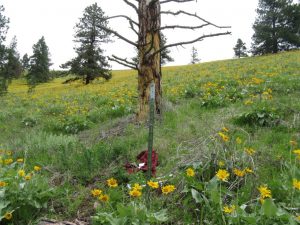