Eggs found at the root crown are white to yellow, darkening with incubation. 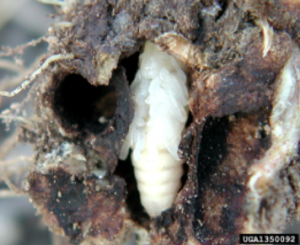 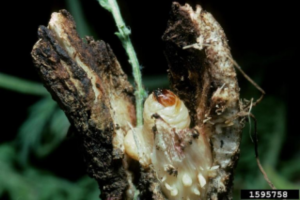 Larvae are legless, have brown heads and c-shaped creamy white to yellow bodies.  Larvae are found primarily in knapweed roots and can be up to 13 mm long. Adults are 13-15 mm long, mottled white and brown or gray.  Males can be distinguished from females by the shape for the abdomen which is flat rather than round. 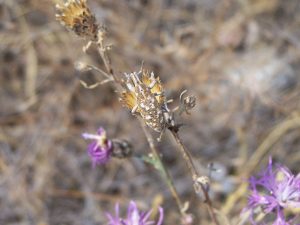 Adult C. achates are much larger than other knapweed weevils and are lighter and mottled in color as oppose to black or brown like most other species (Larinus spp.).  They can be difficult to see on plants but are usually found near the root crown and the tops of plants particularly on hot sunny days or when insects are mating.  Larvae can be distinguished from most other root feeding larvae (Sphenoptera jugoslavica and Agapeta zoegana) by their c-shape, larger size and absence of legs.  They prefer hot dry sites with high knapweed densities, minimal competing vegetation and bare soil.  Larvae may form galls on roots and are typically found in the upper four inches of soil.

Larvae overwinter in plant roots and pupate in early summer. In Montana, adults emerge from roots June through October with peak emergence in mid-August. Adults live approximately 8-15 weeks, during which time females will lay one to three eggs per a day.  Females can lay over 100 eggs in their lifetime.  Larvae hatch from eggs in 10-12 days then burrow into roots where they go through three to four instars (stages of development) before pupating.  These weevils have one generation per year. 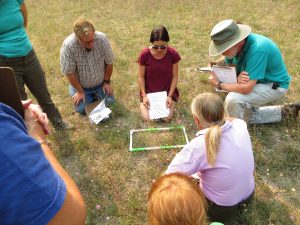 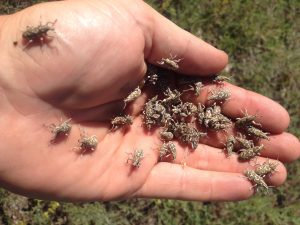 This weevil is widely available in Montana.  If you are interested in obtaining these insects view the biocontrol vendor list for options.

Spotted knapweed is the primary host for C. achates in the USA, however, the weevil has been shown to have impacts on other knapweed species.  Its damage has varied across the Western states with greatest impacts observed in Western Montana where it is well-established. 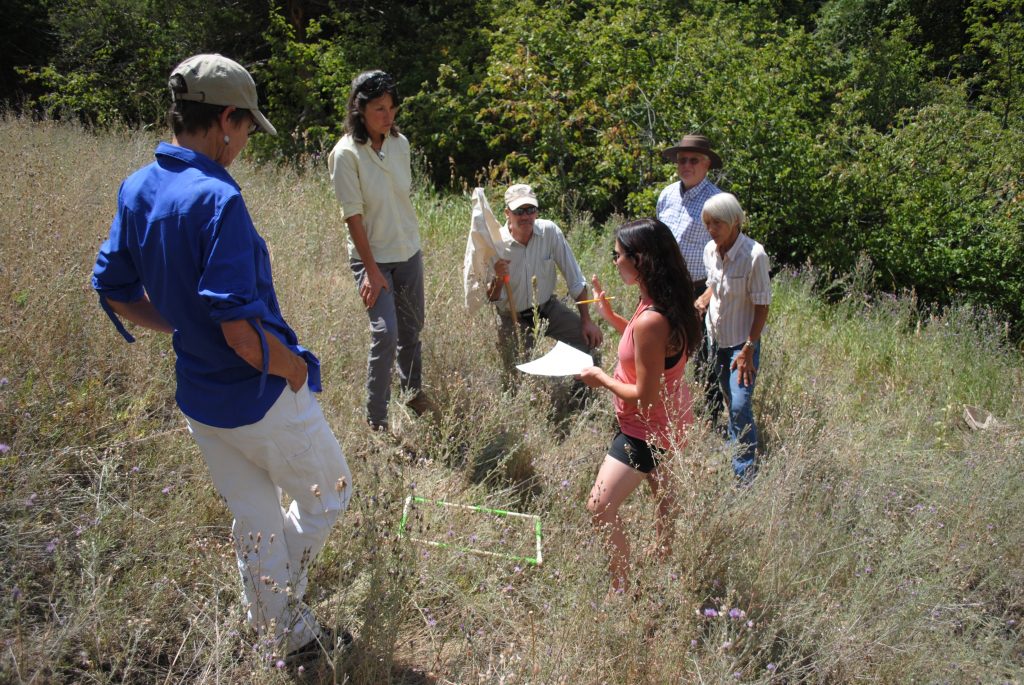 Weevils can easily be collected from established populations with use of a sweep net.  Collection is best on hot sunny days.  Insects should be kept in paper containers with knapweed foliage and stored at approximately 40F.  Release insects in groups of 50-100 over a square meter area.

This weevil is best used in combination with other biocontrol agents and weed management strategies.  Like other biocontrols, the weevil is best used in situations of large, high-density weed populations.  Smaller, isolated knapweed populations should be controlled by other means including hand-pulling and chemical controls.  On large sites where weevils are established chemical controls should be timed with both plant and insect lifecycles in mind. Consult your local weed district or Extension Service for herbicide recommendations.